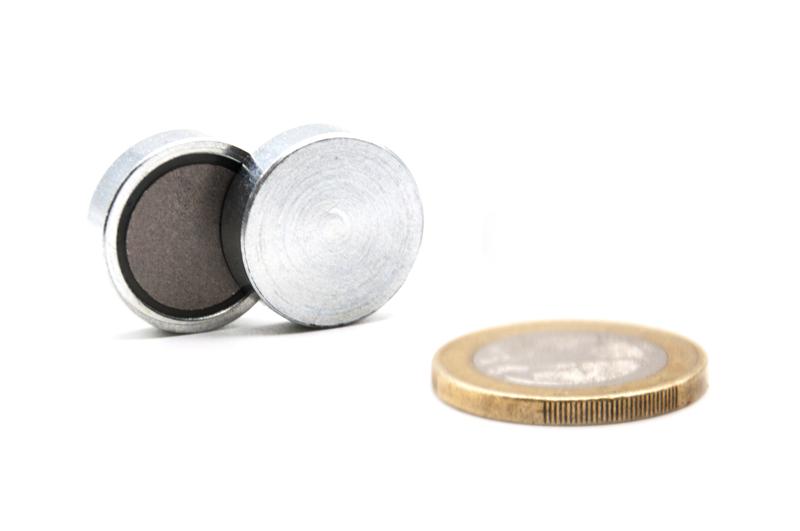 What is a permanent magnet? What types are there?

A permanent magnet is a material that can provide magnetic flux when magnetized with an applied magnetic field and its magnetism capability is characterized by two key parameters: remanence and coercitivity.

A commercial permanent magnet requires relatively high remanence and coercion at an affordable cost and, in contrast to an electromagnet, the latter only behaves like a magnet when an electric current flows through it.

What materials is a permanent magnet made of?

As for the types of materials, permanent magnets manufacture with hard ferromagnetic materials, which are those that, after being magnetized, maintain their magnetic properties until they are demagentized, which is the phenomenon that occurs when applying a magnetic field contrary to that of the beginning.

The materials used for the manufacture of a permanent magnet are:

In fact, there are differences between a neodymium magnet and a samarium magnet, but the neodymium magnet is the most powerful magnet in the world. In relation to manufacturing processes, they include sintered, fused, bonded (compressed, injected, extruded and calendered) and hot-pressed magnets.

On the other hand, permanent magnets are made of natural substances such as magnetite (Fe 3 O 4 ), the most magnetic natural mineral. The Earth itself is a large permanent magnet, although its magnetic field is quite weak in relation to its size. Humans have used Earth's magnetic field for navigation since the compass was invented in ancient China.

Even the most powerful permanent magnet is not as strong as the strongest electromagnets, so their applications are limited, but they still have many uses such as neodymium magnet applications in electric motors. The more mundane would be used as refrigerator magnets, but magnets can be found everywhere, including:

In fact, electric motors operate through an interaction between an electromagnet and a permanent magnet.

How does a permanent magnet work?

Each permanent magnet has two poles, called north and south, although they could be called A and B. Similar poles repel each other while opposite poles attract each other. It takes a lot of effort to keep the repellent poles of a magnet together, while an effort is required to remove the poles of attraction. The most powerful magnets attract with such force that they can cause injury by pinching the skin between them.

For thousands of years, permanent magnets were the only magnets humans had. The electromagnet was only invented in 1823. Before that, magnets were mostly novelties. Using an electromagnet, it is possible to induce a current in any ferromagnetic material, such as an iron clip. However, the effect fades quickly.

At IMA we can advise you on the permanent magnet that best suits your project or need. If you have any questions, please contact us.

Why does the automotive industry require magnetic measurements?

How can a magnet produce sound and good acoustics?

The best magnets for walls with magnetic paint

What does magnetization mean?